There are two ways to integrate XCMetrics in your project. Based on how much customizability you need and the kind of metrics you’d like to collect, you’ll need to take your decision. Here we describe the two approaches.

If you prefer a video version of how XCMetrics works and how you can integrate it in your project, please watch the following video. 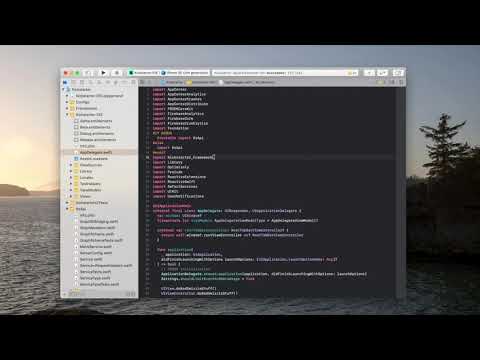 XCMetrics supports a few arguments out of the box that allow you to start sending the default set of metrics to any supported backend service. In this getting started guide, we will show how to integrate XCMetrics in our example project named BasicApp. You can find the completed example app in the Examples/BasicApp directory. Feel free to follow along with your own project.

One of the pre-requisites is to get a binary release of XCMetrics directly from our GitHub repo or compile it locally. In this case, we’ll compile it locally since it’s already in the repo, but we recommend to package it and download it as part of your project configuration steps in order to save time to your developers.

If you’re downloading a pre-built executable version of XCMetrics, you can skip the following section.

In a terminal window inside the XCMetrics repo, run the following:

An executable named XCMetrics will be place inside .build/release/XCMetrics. This is the executable that manages the metrics collection for you.

Now that we have an XCMetrics executable, we can proceed with the integration in your project. Open your xcodeproj (BasicApp.xcodeproj if you’re following our example), select your scheme and press “Edit Scheme”.

Expand the “Build” left panel to reveal pre and post-actions. Let’s create a new post-action by pressing on the “+” button.

Make sure to select your target in “Provide build settings from” in order to provide the build settings to the post-action scheme (required for the next step). Paste the following script in the text area:

This is how the post-action scheme should look like. Let’s break it down:

If you build the scheme now, the build metrics should be sent to your service as soon as the build completes!

All the metrics produced by Xcode in the xcactivitylog are of course collected:

The following metrics are also collected by default for each build:

If you need more customizability and you would like to build your own plugins to collect even more data alongside each build, the solution is to write your own SPM packages to extend XCMetrics. At Spotify for example, we have SPTXCMetrics which collects even more data from developers’ machines to make our analysis on build data more powerful and detailed.

Start by creating a new SPM package with the following command:

Open the newly created Package.swift and modify it as following (this is an example of our internal SPTXCMetrics implementation):

We now have wrapped XCMetrics in a new SPTXCMetris target. This target can include more plugins and logic that will be executed by XCMetrics when collecting metrics.

XCMetrics and XCMetricsApp will not accept substantial new features. We built XCMetrics to be extensible and configurable from your own Swift Package. We would still like to offer a series of plugins that you can directly reuse without rewriting common metrics collection plugins. The XCMetricsPlugins library is available for you to depend on. It allows you to add more metrics collection capabilities to your version of XCMetrics.

Start by adding a dependency on XCMetricsPlugins to the newly created SPTXCMetrics target:

Here’s an example of a custom version of XCMetrics named SPTXCMetrics that adds thermal throttling information (that can usually affect build times) collection by using a plugin available in XCMetricsPlugins.

For examples on how to write custom plugins, take a look at the existing plugins in XCMetricsPlugins. In short, each plugin is given access to the environment variables of the build in a dictionary for even higher customizability. You can provide values from your build environment and track them when collecting metrics for example. Each plugin should return a dictionary of values that will be attached to each build and stored as build metadata.

Feel free to contribute new plugins to XCMetricsPlugins. We’re happy to add more features in order to make them available to the wider community.

In case of issues, here are some useful tips on how to debug them: